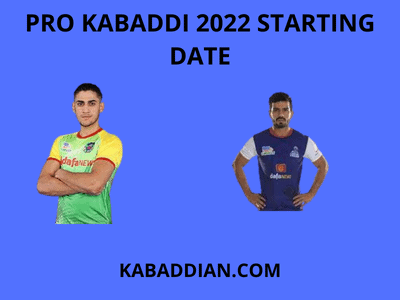 PKL starting date of all seasons, details about possible venues.

The PKL season 9 auction ended on 6 August. All the teams tried their best to get the best squad and all of them succeeded in it. As expected Pawan Kumar Sherawat got the highest bid and became the most expensive player in PKL history. Tamil Thalivas bought him for a huge amount of 2.26 crore rupees. Former Haryana Steelers Captain Vikas Kandola was bought by Gujarat giants for 1.70 crore rupees. He along with Pawan broke Pardeep Narwal’s record of the highest price. UP yoddhas bought him for 1.65 crore rupees in season 9.

Today we will talk about the expected date of the start of PKL and details about the possible venues for the upcoming tournament.

The pro Kabaddi league generally starts in July every year, but due to the pandemic season 8   was not played in 2020 and it was delayed for the next year. When the covid cases became low, the PKL was started on 22 December 2021 in the absence of spectators and hosted at 2 venues only. This year the covid cases are in control and fans will be allowed to go to the stadiums and watch the PKL matches live. According to sources, PKL is about to start in the second half of October month.  This will be the second time in PKL history that two different seasons are played in the same year. Season 8 of PKL ended on 28 February this year and season 9 will be played in the same year. This scenario happened In the year 2016 when two seasons were played in the same year, season 3 started on 15 January 2016 and season 4 started on 15 June of the same year. Star sports will be the official broadcaster for the league.

PKL Starting date of all seasons:-

The 2015 Pro Kabaddi League was the second season of the Pro Kabaddi League. The season started on 18 July 2015 and ended on 23 August 2015. The runners-up of the inaugural PKL season, U Mumba took on the Bengaluru Bulls in the Season 2 finale and won by 36 -30.

Pro Kabaddi, which saw astonishing success in its second season, was all set to make its much-awaited return for a third season on 15 January 2016, just five months after the completion of the second season. Season 3 ended on 5 March 2016.  Patna Pirates defeated the then reigning champions, U Mumba, 31-28 to win their maiden PKL title.

The 2017 Vivo Pro Kabaddi League season was the fifth season of the Pro Kabaddi League. This season started on 28 July 2017 and ended on 28 October 2017. This season includes 12 teams after the inclusion of four new teams: UP Yoddha, Tamil Thalaivas, Haryana Steelers and Gujarat Fortune giants. It was a one-sided affair in the Pro Kabaddi Season 5 final as Patna Pirates beat Gujarat Giants 55-38 to complete their hat-trick of titles.

The 2018–19 Vivo Pro Kabaddi League was the sixth season of the Pro Kabaddi League. The season began on 7 October 2018 and concluded on 5 January 2019. Bengaluru Bulls defeated Gujarat Giants 38-33 to lift their maiden PKL title.

The 2021-22 Vivo Pro Kabaddi League was the eighth season of the Pro Kabaddi League. The season began on 22 December 2021 and ended on 25 February 2021.  Dabang Delhi K.C. emerged as champions, beating the three-time champions Patna pirates by just 1 point.

As mentioned earlier, SEASON 9 OF PKL IS PROBABLY GOING TO START IN THE SECOND HALF OF OCTOBER 2022.

As per sources, PKL will be played in 3 different venues this year.

Kanteerava Indoor Stadium, also known as the Sree ( Sri ) Kanteerava Indoor Stadium, indoor sporting arena located in Bangalore,( India), near Cubbon Park, within the heart of the city in the Central Administrative Area. The capacity of the arena is 4,000 people.  This is the Home ground of Bengaluru Bulls. This is a Beautiful sports complex with an elliptical dome shape. Sampangi Lake was changed to create this sports complex. Not only are kabaddi matches played here, but also basketball matches are played here at this sports complex. The Stadium hosted the SABA Championship in 2015 and 2016. India’s national basketball team won the gold medal on both occasions.

The Shri Shiv Chhatrapati Sports Complex is a sports complex located in Pune (India). The complex is situated about 15 km from Pune. This is the Home ground of puneri paltan and is also known as Balewadi Stadium where 7 matches were played in 2014 and 2015. This complex was the venue for the 2008 Commonwealth Youth Games.  The sports complex was also the venue for the Khelo India Youth Games in 2019 and was out of the AFC Women’s Asian Cup. Various types of sports are played here. The kabaddi stadium has a seating capacity of about 3500 people.

EKA Arena (formerly The Arena) is a multi-purpose stadium in Ahmedabad, Gujarat, located near Kankaria Lake.  The Arena hosted the historic Kabaddi World Cup in 2016. It has hosted legs of the Pro Kabaddi League, serving as the designated home arena of the Gujarat Giants built for 550 crore rupees the stadium was completed and opened officially on 7 October 2016. It was built in a public-private partnership between the Government of Gujarat and SE Trans India. Indian Prime Minister, Shri Narendra Modi visited the inauguration ceremony of the stadium in Ahmedabad, on June 30, 2017.

Kabaddi fans are excited to watch the live action of PKL.