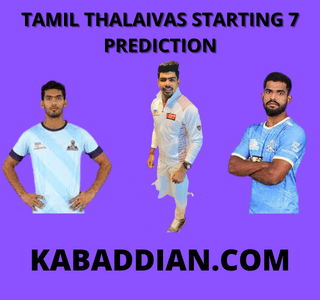 The PKL season 8 auction ended on 6 August 2022.PKL is going to start in October 2022. The team management and players will do their best to lift the trophy this year. All the teams tried hard to pick the best squad in the auction and most of the franchises succeeded in it. It will be a difficult task for the team management to choose a seven-member team for the first few matches. We will try to predict the team for the initial matches of the season.

Today we will talk about the possible opening 7 for the Tamil Thalivas team.

The most expensive player in PKL history, Pawan Sherawat is also the possible captain of the team. He will be the main raider for the team for the entire season. Last year during season 8, he scored 320 raid points for his previous franchise Bengaluru Bulls. He will be the centre of attraction of the whole PKL because of the high price tag he has, therefore he has the responsibility to perform well and lead the team to victory and prove his price worthy.

Ajinkya was retained by the franchise this year for 33 lakh rupees. In season  8, he played 18 matches for Tamil thalaivas and scored 114 points (102 raids and 12 tackle points).

M Abhishek is playing for Tamil thalaivas for the last two seasons. However, he did not get the required opportunities, but he has very high potential. We may see him play in the opening matches for his team.

Tamil thalaivas management has shown great faith in Mohit. He played 20 matches in season 8, which was also his debut season, where he scored 24 points. The franchise retained him for season 9. We may see him playing the starting matches.

Himanshu delivered a good performance in season 8 where he scored 40 points in 10 matches with an average of 3.8 raid points per match.

Sagar was fantastic in season 8 where he scored 82 tackle points in 22 matches including 8 high 5s and 8 super tackles. He is playing for thalaivas since season 7 and they retained him for season 9 as well. He will be the significant defender for the franchise throughout the season.

If these players remain fit and keep themselves away from injury then they can do their best in the upcoming pkl season. It will be exciting to see how this player proves their price worthy.