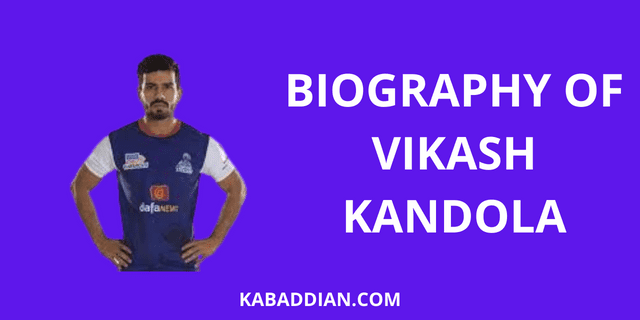 “Increase your quality your value will automatically be increased” –  this is a famous statement that most motivational speaker uses in their sessions. During the season 9 auction, we saw this statement proving right again when a 24-year-old boy got 1.7 crore rupees. Yes, you read it right, a team spending about 40% ( total purse – 4.4 crore rupees) of their auction purse for a 24-year-old player. This shows what quality of game this player got. His name is Vikas kandola. Vikas was born on 2 April 1998 in the Jind district of Haryana. Haryana has given so many Kabaddi players and Vikas is one of them. He was born in a village where the craze for Kabaddi was very high.

In his early childhood at the age of 8-9 years, he started playing kabaddi. In childhood, he surprised everyone with his game skills and his coach Dharmaraj Kandola helped him to pursue further training in the game.  He made his appearance at school and junior nationals as well as University Nationals. He came under national recognition after representing Haryana state in nationals. He was bought by dabang Delhi KC in season 4 . However he didn’t get many opportunities and got in the 7 men’s squad only 4 times where he managed to score 3 raid points in the 17 raids, and he didn’t succeed in his debut season in the way he wanted.  This cost him as he was released by the franchise. in the season 5 auction, he was bought by his home franchise Haryana steelers for 15.24 lakh rupees.

This, season he decided not to miss the opportunity and score 58 points in just 9 matches. The most exciting thing was his bonus scoring capability and his special talent of running hand touch was incomparable. The Haryana steelers management was impressed by this exciting talent and they decided to buy him for season 6 at a rate of ₹ 47 lakh. He proved it worthy by scoring 177 (172 raid points and 5 tackle points ) including 6 super 10s. He remained the most successful raider for his franchise this season. Haryana Steelers retained him again for season 7 for 77.83 lakh rupees. He also didn’t break the expectations this year and scored  195 points in just 20 matches( 190 raid and 5 tackle points) including 11 super 10s. This was a special season for him as he scored a super 10 in every alternate match. At this time he became the main raider for Haryana and they retained him again in season 8 at 87 lakh rupees. As expected he continued his match-winning performances and score 180 points(175 raid and 5 tackle points)including 8 super 10s.

In the season 9 auction, he broke the record of Pradeep Narwal as the most expensive player and got rupees 1.70 crores surpassing Pardeep’s record of rupees 1.65 crores. Bengaluru bulls bought him for a such colossal price. It will be exciting to see how he will perform in season 9 or if his performance also gets affected by the price tag as happened earlier with Pardeep. Fans will hope that Vikas kandola will do his best in the new franchise.

Talking about his formal education he completed his graduation with a BA from Rajiv Gandhi College Uchana.