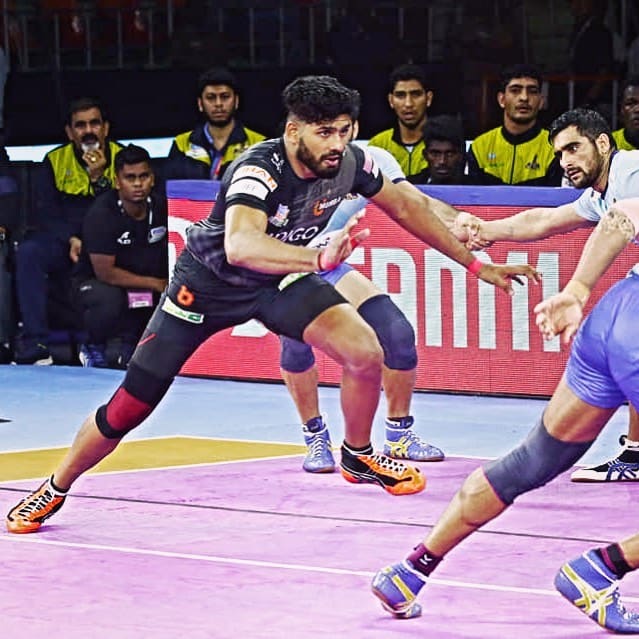 Our favourite Kabaddi players use various skills while playing kabaddi like the dubki king Pardeep Narwal using dubki and Sultan Fazel dashing the raider. So, we will know about some Kabaddi skills which our favourite player use while playing. Let’s get started.in this post, we listed many kabaddi skills for raiders and defenders. if you want to learn the basic skills of kabaddi then follow this article.

kabaddi  Skills for the raider.

Firstly, we will see the raiding skills that the raiders use while playing the sport.

While raiding, this is one of the most common skills of kabaddi that raiders use in the game. when a raider is on the opposite side while raiding and trying to touch a defender, he suddenly increases his speed of running and stretches his hand towards the defender to touch him and after touching the defender he quickly escapes to safety. But, it also involves a risk from the corner defender to dash him. Ajay Thakur is one of the raiders who mostly use these skills. Maninder Singh, Pawan Sehrawat, and Naveen Kumar are some other raiders whose signature move is Running Hand Touch.

The toe touch is also one of the widely used skills of kabaddi of raiders because it offers the raider to score a touchpoint with a bonus point also. The raiders also use this because most of the time the defender is expecting a hand touch. In this move, the raider quickly extends his leg towards an unsuspecting defender and touch him just with his toe. If the raider uses it correctly then, it is one of the best-surprised moves to the defenders. Former Kabaddi player Anup Kumar is one of the best raiders of this skill.

Siddharth Desai, Maninder Singh, and Kashiling adage are some other players who use this skill.

It is one of the stunning moves by the raiders used in Pro Kabaddi. This move includes Raider launching himself off the ground touching one or more defenders and escaping to safety. It is a highly effective move to counter block and chain tackles and the raider also uses a defender’s back as a springboard to get the momentum while using this skill. Pawan Sherawat, Rohit Kumar, and Ajay Thakur are some raiders who used this skill to save them on many occasions.

This move is one of the surprising moves to the defenders used by the raiders. During this move, the raider needs to turn back to the midline and then snap his back knee up to touch the defender on the way back just like a scorpion as its name. it requires balance, timing, and flexibility to use this skill and touch an unsuspecting corner defender. Jasvir Singh is the one who popularized the skill by executing this. Meraj Sheikh and Jang Kun lee are some other raiders who often use this skill.

It is one of the famous moves of Kabaddi as the league’s highest raid points scorer Pardeep Narwal continued with this skill on his success journey. Dubki is a skill where the raider needs to be flexible as he needs to duck low off the ground between a chain of two raiders and then return to safety. Patna’s captain Pardeep is a famous raider of this move. Very few defenders have the answer to Pradeep’s dubki. Haryana’s coach Rakesh Kumar and Delhi’s Naveen Kumar are some other players who often uses this move.

HOW TO BECOME A PRO KABADDI PLAYER

Now, we will have a look at the skills of the defenders that they use while playing.

One of the most used and famous defensive moves, Ankle hold is one of the difficult skills to have mastered for the defenders. It requires timing as well as strength as a defender single handly catches a defender and then the other defenders come and help him. with a tremendous grip, timing, and strength, the defender caught the raider’s ankle and pull him towards himself while the raider is rushing towards the mid-line. this move is mostly used by the corner defenders. Surender Nada is considered the best defender of this move-in PKL. Joginder Narwal, Dharamraj Cherlathan, and Sandeep Dhull are some other defenders who use this skill.

Block is a skill that requires tremendous strength for the defender. In this move, the defender came in the way of the raider and stand like a wall in front of him and the midline. They use their upper body to stop the raider in this skill. It requires the right combination of pace and strength to stop the escaping raider by this move. Manjeet Chhilar and Jeeva Kumar are some players who use this skill. Sunil-Parvesh is also some other player who used this skill to catch the raider.

This is one of the kabaddi skills in which the defender requires a lot of strength. In this move, the defender uses his strength and comes across the mat and uses the full force of his momentum to get the opposition raider out of the mat. This move is mostly used by the opposite corner and cover defender. This move is also about the timing between the raider and the defender because every second can fail the tackle. Surjeet Singh, Manjeet Chhilar, and Girish Ernak are some players who use these kabaddi skills.

The last move in this list is back held. The back hold is a hold where the defender wraps his hand around the raider’s wrist tries to hold him as its name indicates. it requires a grip that is difficult to master and awareness also. it is mostly used by the corner defender, they caught the raider who is trying to score a point. Fazel Antrachali, Joginder Narwal, and Baldev Singh are some defenders who use these kabaddi skills.