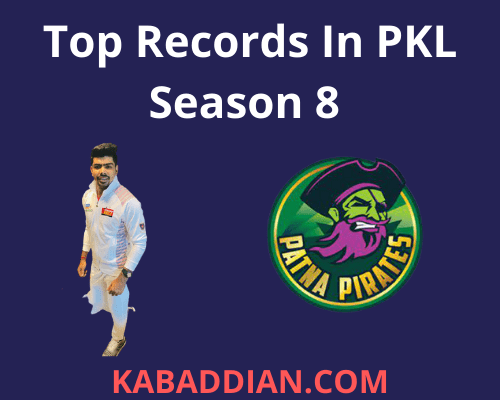 Rinku Sharma is the new young player of the Umumba team who debuted in season 8 and created a record in his debut season which seems impossible to break.

We have never seen such as in Pro Kabaddi League Mohammad Esmail Nabinakdh’s the last player who survives on the court and goes for a raid against Bengaluru Bulls. Bangalore Bulls player Chandran Ranjit gets themself out, Nabibaksh does not touch any player and he is also entitled to self out.

Following the chase to get Nabibaksh out, six more players went into the lobby without struggle and he too got himself out by mistake due to the dismissal of all the players, a player who was out earlier got a revival due to the dismissal of Nabibaksh. We have never seen this before, all the defenders were also out and the raiders were also out in the same raid and its points was given to the technical points of Bengal warriors and not to Nabibaksh.

Patna Pirates inflicted most all out in pro kabaddi season 8. As we all know that after dismissing all the players of a team 2 points extra are given to the opposite team that we call “All Out Points Or Loona”. In Vivo Pro Kabaddi League Season 8, Patna Pirates made the most All Outs to opponent teams Patna Pirates did a Total of 38 All Outs in Pro Kabaddi Season 8 which was the most in PKL Season 8.

5. Most High 5s and Most Tackle Points –